BIRDSONG SHIRLEY ROSE was born on September 24, 2012, and will celebrate her 8th birthday this month! She is a small standard Jersey and stands 49 inches tall when measured to the top of her hip.

Shirley Rose is a granddaughter of my first cow, Blossom, and like all the cows in my Blossom family, I named her after flowers. The inspiration for her name came from an aunt with the middle names of 'Shirley Rose.' 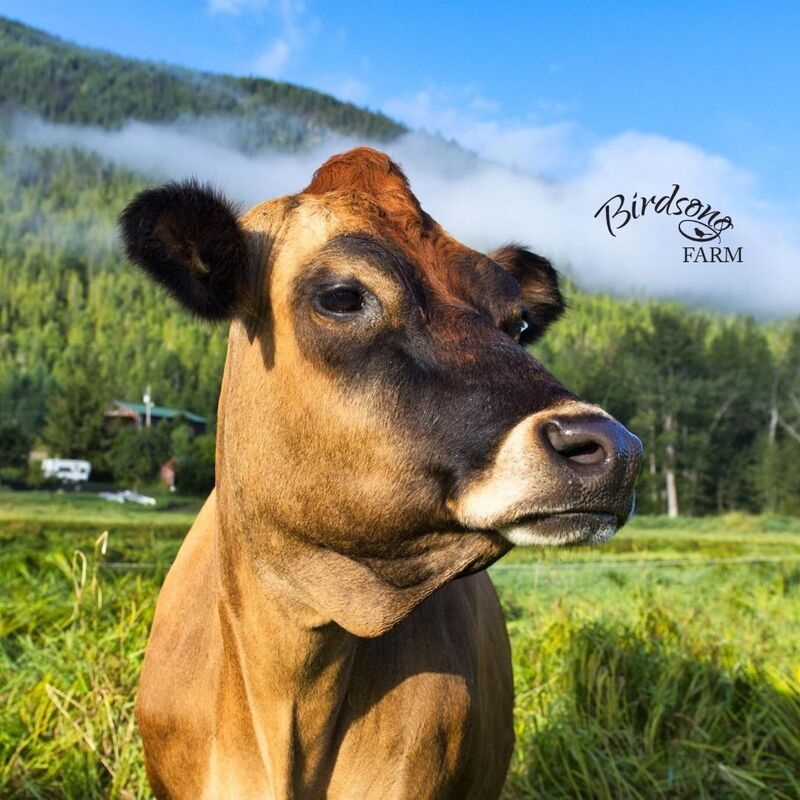 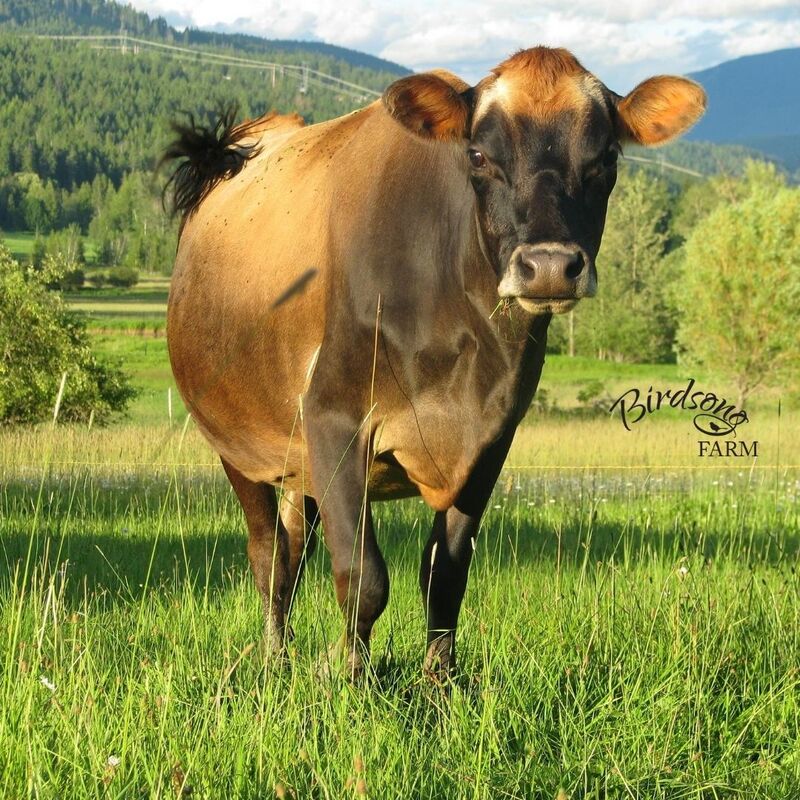 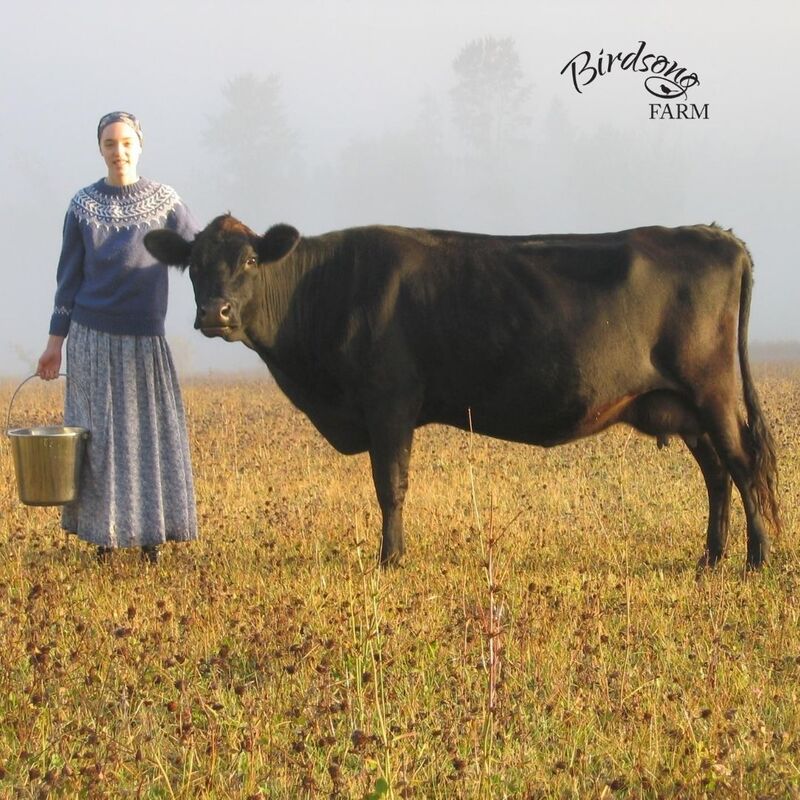 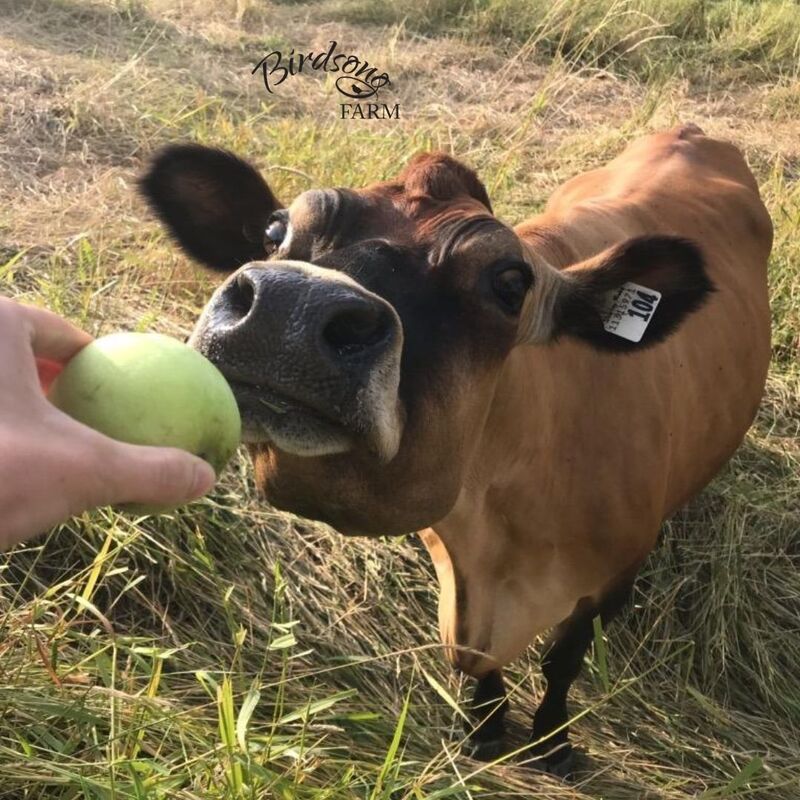 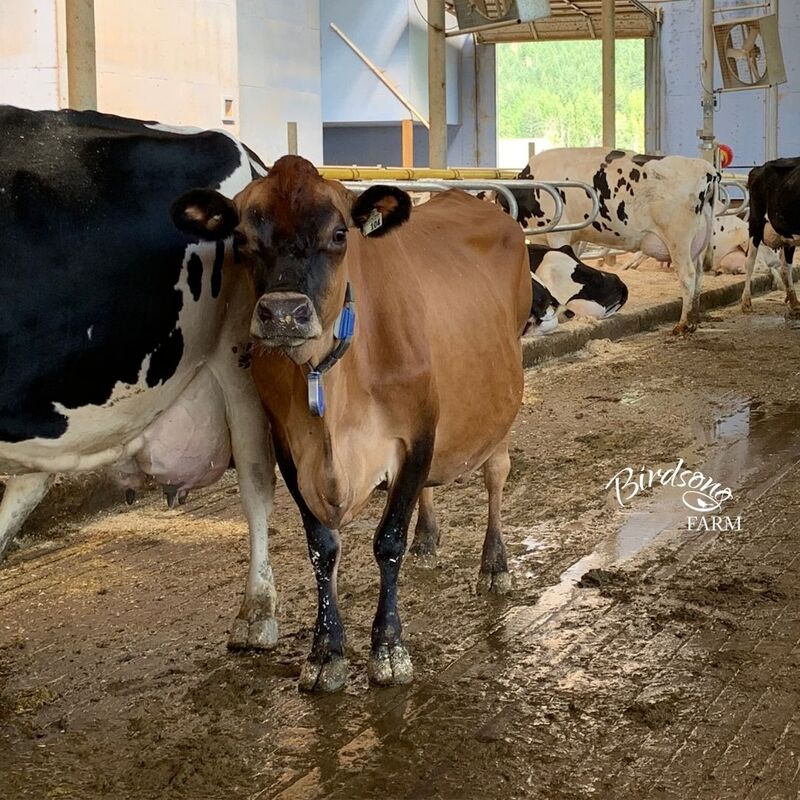 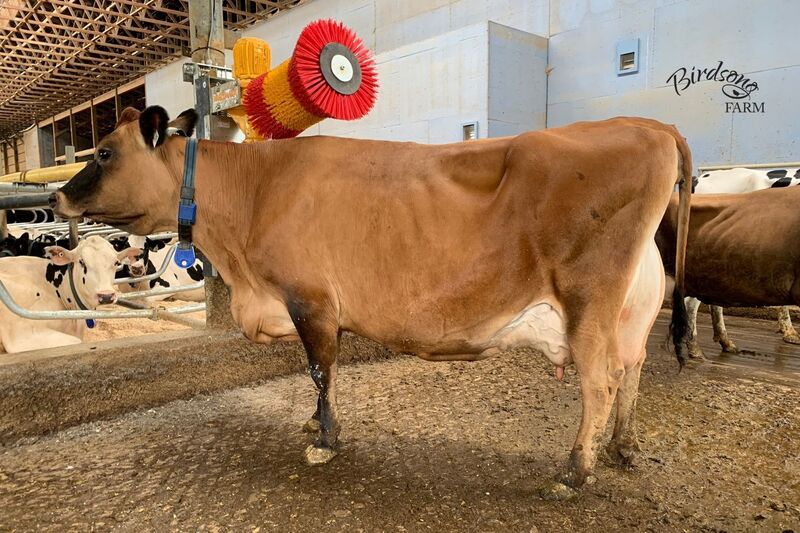 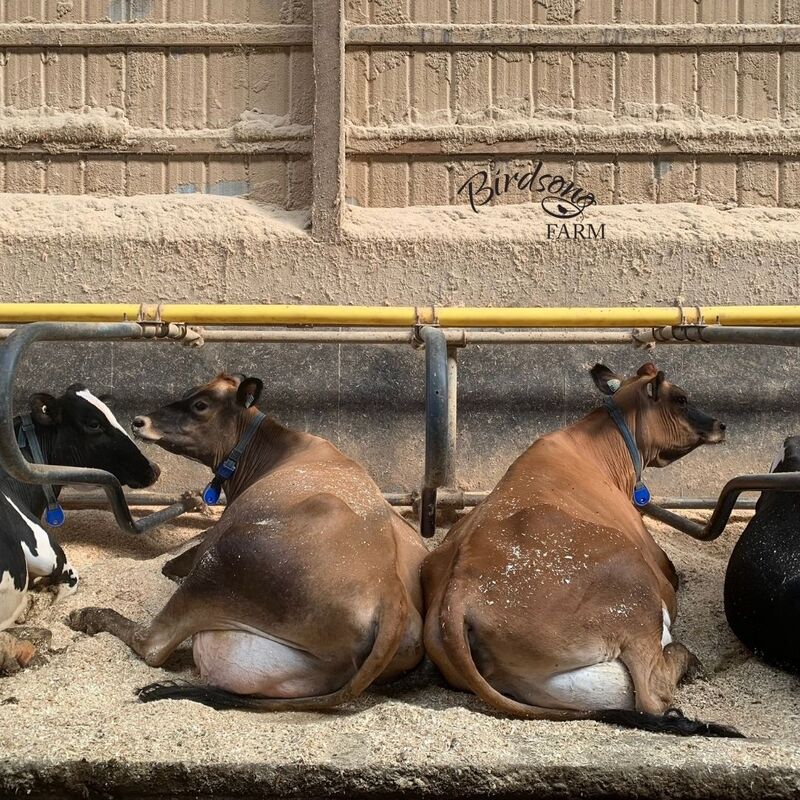 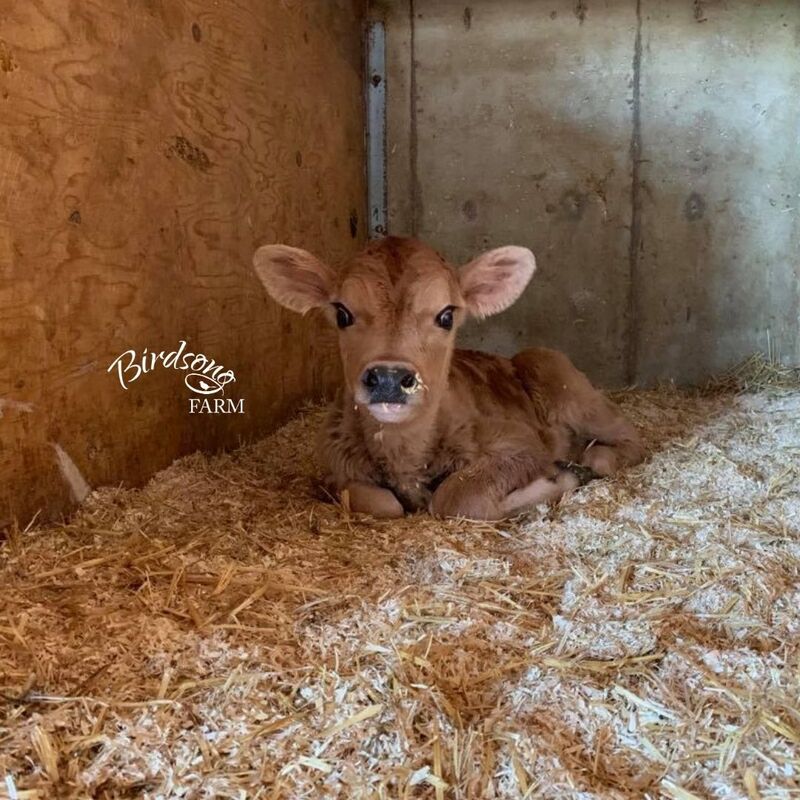 I tested Shirley Rose with the Medium Density (MD) genotype panel, and she has a Genomic Lifetime Profit Index (GLPI) of 732 (Aug*20, 63% reliability). Shirley Rose is a tested carrier of the JH1 haplotype and tested free of the JH2 haplotype.
​What is Jersey Haplotype 1 (JH1)? A haplotype is a set of DNA variations that tend to be inherited together. This particular haplotype affects fertility in the Jersey breed by causing early embryonic loss within the first 60 days after breeding. The good news is that JH1 is not a problem unless a carrier cow is bred with a carrier bull. When two carriers are mated, there is a 25% chance that the embryo will inherit two copies of the JH1 defect, which is not compatible with life.

When breeding a JH1 carrier like Shirley Rose, I recommend selecting a bull that is tested free of the haplotype (look for the JH1F designation on his proof). When you mate a JH1 carrier with a non-carrier, there is no risk of early embryonic loss because the embryo can't inherit two copies of the defect. However, there is a 50% chance that the embryo will inherit one copy of the defect and the calf will be a carrier of the haplotype.
Calves & Breeding: Shirley Rose has given birth to five calves: Minion was born on September 18, 2014; her first heifer calf, BIRDSONG SWEET JASMINE, was born on April 2, 2016; her second heifer calf, BIRDSONG SUNSHINE MARIGOLD, was born on March 27, 2017; Quesnel was born on July 29, 2018; and Shamrock was born on March 17, 2020.

Shirley Rose was bred with RIVER VALLEY SPICE SHOWDOWN on July 15, 2020, and the due date for her sixth calf is April 19, 2021. She was preg checked via ultrasound and confirmed pregnant by our herd veterinarian at 28 days after breeding, with a positive recheck at 42 days.

When breeding Shirley Rose, I recommend looking for a bull that can improve the udder (strengthen the median suspensory and fore udder, and add height and width to the rear udder), add dairy strength (increase chest width and dairy capacity), and refine the rump (increase loin strength and lower the rump angle). If you breed her with a registered Jersey, her heifer calves will qualify for registration with Jersey Canada as percentage purebreds at 87.5% pure. 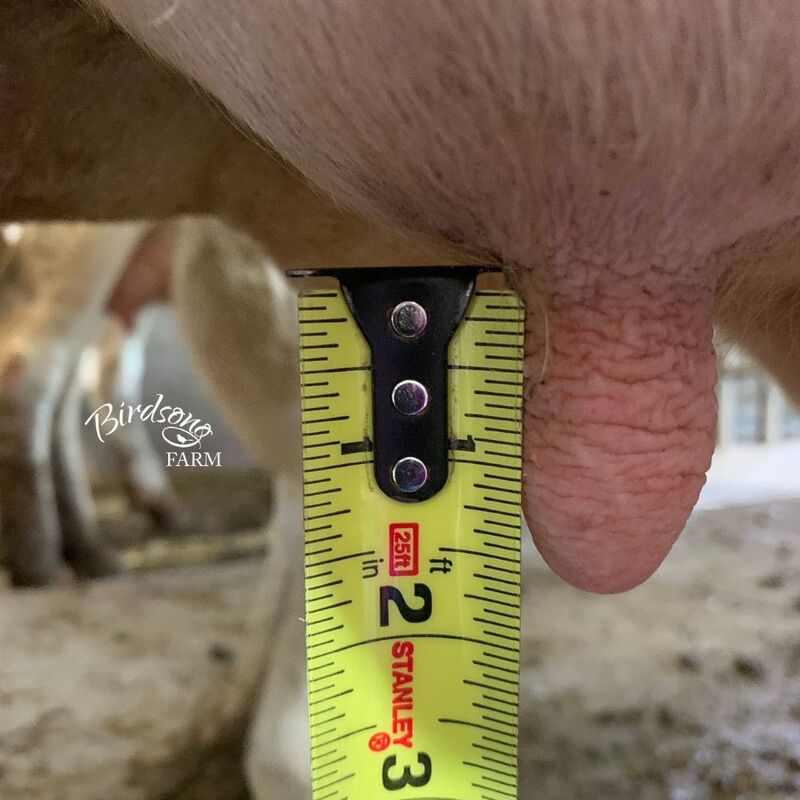 Shirley Rose's front teats are between 1-1/2 and 2 inches in length.

Her back left quarter is a bit lighter than the right one. 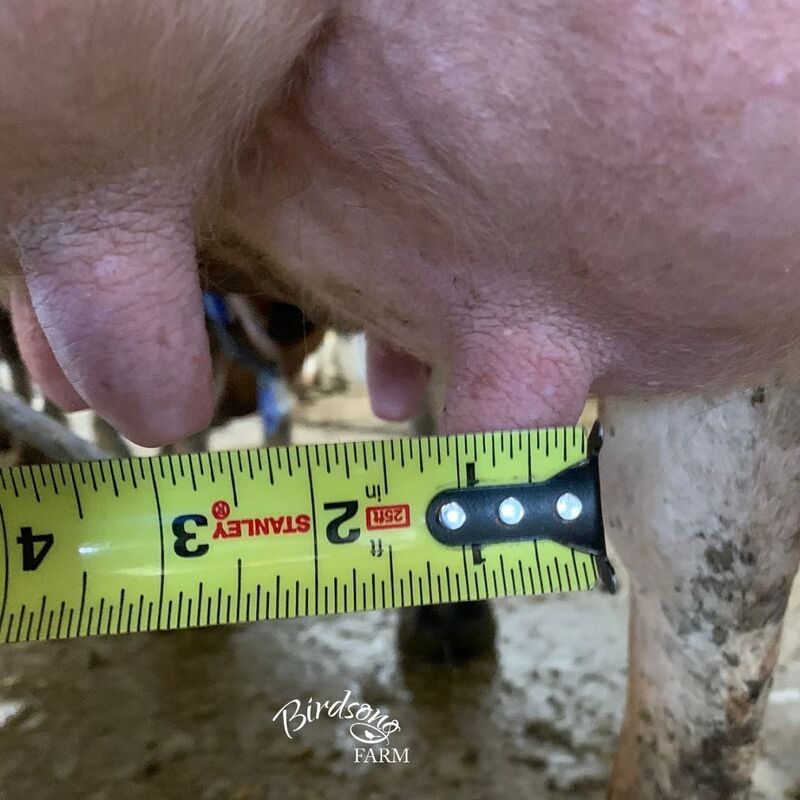 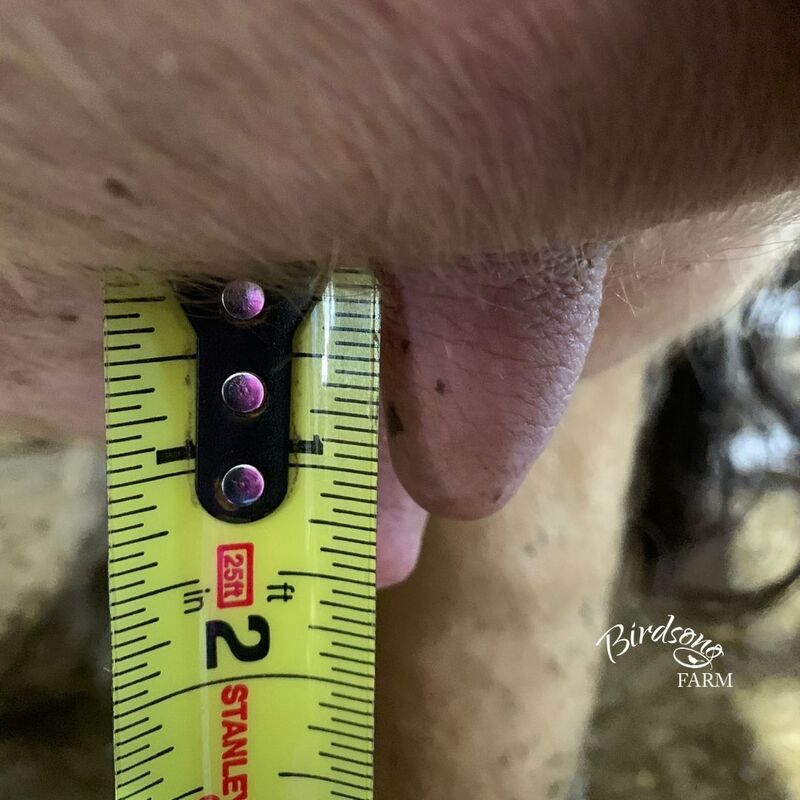 Her rear teats are about 1-1/4 inches in length.
Milking: Shirley Rose is in her fifth lactation and currently producing around 12 kilograms of milk a day (1 kilogram = 1 litre). She should be dried off by February 17, 2021, to allow for a 60-day dry period before her next calf is born.

She is machine milked right now, but she is familiar with hand milking as well. Shirley Rose spent her first lactation as a family milk cow, and my sister and I milked her by hand twice a day. Since then, she's been milked by machine, first in a double-6 herringbone parlour, then with a DeLaval milking robot, and now in a double-8 herringbone parlour. Her front teats are between 1-1/2 and 2 inches in length. Her back left quarter is a bit lighter than the right one, and her rear teats are spaced roughly 3 inches apart and are about 1-1/4 inches in length.

Shirley Rose was placed on DHI milk test beginning with her second lactation. She received unofficial (management) records for her second and third lactations, and official (publishable) records for her fourth lactation, with 18,696 kilograms of milk at 5.6% butterfat and 3.9% protein recorded. She's on official milk test again this lactation, and as of 142 days after calving, she has produced 3,168 kilograms of milk at 4.8% butterfat and 3.9% protein. Please click here to view her publishable lactation data from her fourth and current lactations.

The A2 variant of Beta Casein A2 is associated with increased digestibility for about 25% of the population. Anecdotal evidence and data from several small human studies indicate that about 1 in 4 people are sensitive to the A1 protein, and drinking milk or eating dairy products from A1/A1 or A1/A2 cows can cause digestive upsets. (Read my CowTales post, What is A2 Milk?, to learn more about Beta Casein A2.)

The A variant of Kappa Casein is associated with higher milk production; the B variant is associated with improved rennet coagulation properties and increased cheese yield and favoured by cheesemakers.
Classification & Prizes: Shirley Rose was classified twice in her first lactation; her initial score was Good Plus 81 before being raised to Good Plus 83 seven months later. I classified her again in her third lactation, and she achieved the milestone of being my first cow to receive the score of Very Good 88! Please click here to see her classification scorecard.

I entered Shirley Rose in the Jersey show at our local fall fair, the Interior Provincial Exhibition in Armstrong, BC. She was 8th place Senior Calf in 2013 and 2nd place Junior Yearling in 2014.

Health History & Disease Testing: Shirley Rose was disease tested by our herd veterinarian on June 17, 2020. No bacteria were isolated from the milk culture, and she tested negative for Bovine Leukemia Virus (BLV), Bovine Viral Diarrhea (BVD), Johne's, and Neospora.

Shirley Rose was disbudded as a calf and given a magnet when she reached breeding age to reduce the risk of hardware disease.

She developed mastitis in one quarter while she was dry with her fourth calf, which wasn't discovered after the calf was born. She was treated and fully recovered, and no bacteria were isolated from her recent milk culture.

Shirley Rose was extremely obese when she calved this spring, after an extended fourth lactation and lengthy dry period. As expected, she went through a pretty rough patch after calving with ketosis and acidosis and other related complications, but she's back on track now. She's definitely an easy keeper, so I recommend breeding her back within 60-90 days after calving.

She has excellent feet. According to our hoof trimmer, she has the best feet in the whole barn! We trim her hooves once or twice a year, and the hoof trimmer was here on August 17th.

She is vaccinated annually with Covexin Plus, to aid in the prevention tetanus and blackleg.

Price: Shirley Rose is a special cow, so the decision to sell her was a very difficult one, but due to lower milk production, she's better suited to life as a family cow than on a dairy farm. She likes being the boss cow, so being an only cow or part of a small herd would be perfect for her. She's gentle and enjoys lots of attention and cuddles—after she gets to know you! She was halter trained as a calf and still leads beautifully. I can even lead her around the barn by her collar!

I am asking $3,800 for Shirley Rose. One straw of conventional registered Jersey semen with free breeding is included. (If you do not live locally, I will cover semen shipping costs up to $150 instead of free breeding.)

I've compiled a folder with all of her paperwork for her new owner, including a copy of her registration papers, her classification scorecards, her certificate of production, her milk protein DNA test report, her August 2020 genomic report, the disease testing report from the vet, and her health and breeding records for this lactation. Her buyer will also receive one year of complimentary Homestead Cow Training calls ($630 value).

If Shirley Rose sounds like your dream cow, you can book a call with me. Buying a cow is a significant investment, and I want Shirley Rose's buyer to be 100% satisfied with their purchase. This interview process allows me to learn more about you and your farm and what you're looking for from a family milk cow, and we can assess if Shirley Rose is the right one for you.
By visiting www.naomisbirdsongfarm.ca, you are consenting to our Terms & Conditions and our Privacy Policy.
© Birdsong Farm, 2011–2022